What is Commercial Law?

Commercial law focuses on the laws that govern all business transactions. The law may focus on responsibility of conduct among businesses and their employees, intellectual property, business rights and behaviour, contractual obligations, and any other aspect of business and commerce. For this reason, you will often find overlap between business, common civil, and sometimes criminal matters.

Due to the complexities and wide-legal coverage, it is often more understandable to break commercial law down into smaller categories, to focus on clients’ personal needs. While overlap is common in any law, commercial law can be broken down into four smaller, categories, yet each has their own degree of complexities and are best interpreted by a lawyer knowledgeable in that specific area of law.

• Employment Law: Rights of employment for an employee, and legal requirements of a business.
• Contract Law: All laws governing contracts; written, verbal, and hand-shake.
• Intellectual Property Law: Laws governing intellectual property of businesses and individuals.
• Dispute Resolution: Attempts to resolve legal matters outside of court. It is usually the requirement of the court to attempt dispute resolution prior to using the court system. 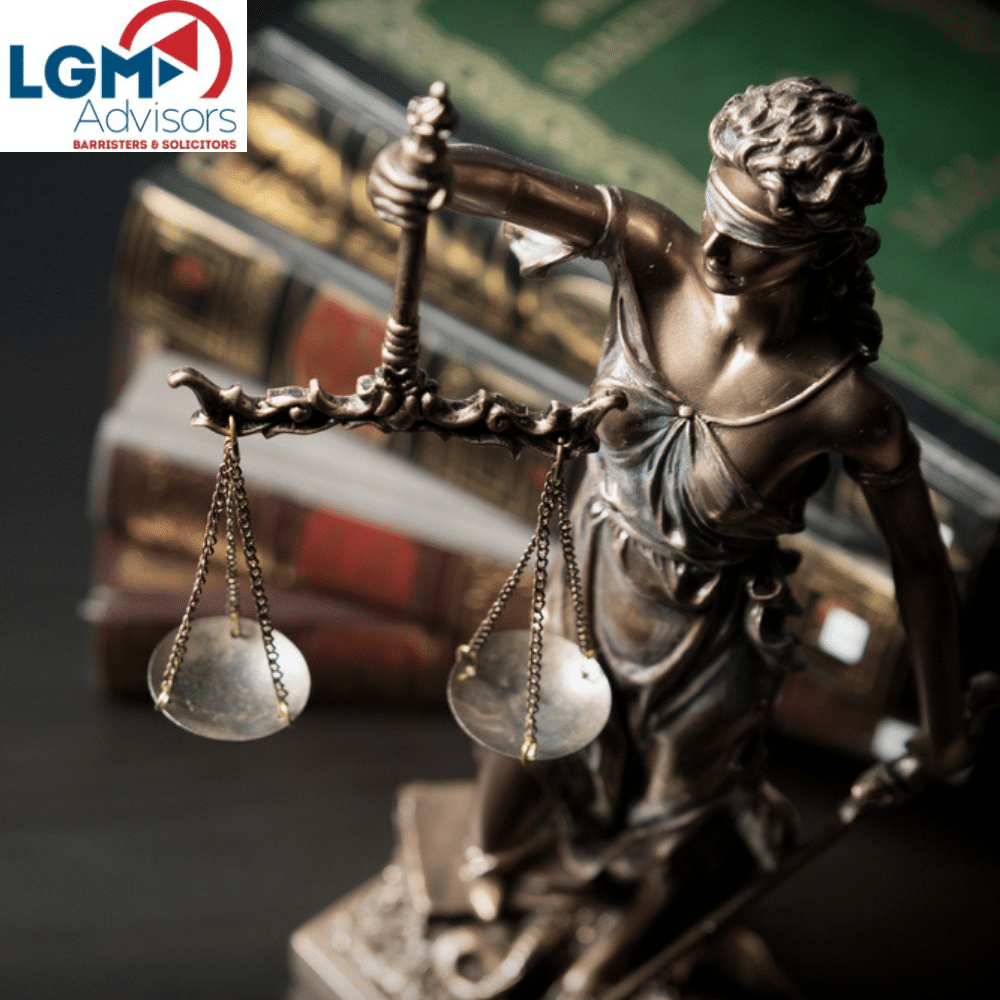 An employer is responsible for the actions of the company, leadership, and employees. Whereas leadership acts on the behalf of the company as a whole, the business is directly bound to the actions leadership takes in conducting their behaviour with employees. For example, if a leader unlawfully dismisses an employee, or creates an uncomfortable working condition for an employee the company is, in many cases, directly responsible. In regards to employees, it is the company’s responsibility to protect employees and respond to reports of unsafe work conditions and negative behaviour such as discrimination or harassment. An employer who does not react to a known situation is just as culpable as those employees who are creating the situation.
Employment is governed by strict laws for employers, with guidelines on dismissal, grounds for dismissal, and legal, or fair, ways to notify a person they are being dismissed. Where law may allow for interpretation in many areas of law, the majority of employment law is not up for interpretation. However, dispute resolution can often be managed out of court.

Where employment law focuses on employees working directly for a company, contract law can be thought of as laws to protect independent contractors, freelancers, and any other disagreement pertaining to contracts, whether among individuals, companies, or both. Contract law is often challenging due to the many types of contracts and agreements available. A written contract is the easiest to enforce, however due to the complexities of lengthy written contracts there are variables that can either void or acknowledge poor intent. Verbal and hand-shake contracts are also disagreeable terms argued among parties and are more common among contract and freelance services. While the terms of these contracts are often disagreed, and considered “live-agreements”, meaning they frequently change, they can be upheld by proof such as emails, text messages, completed work, and terms recognized as industry standard.

It is important to understand the laws regarding contracts, as well as the laws demonstrating breach of contract. A contract is legal as long as the following are applied and understood by both parties:
• Two or more parties agree to create a legal agreement for services rendered.
• All parties must understand they are in the agreement
• An offer has been made by one party, and accepted by another
• Each party must have given and received something as part of the contract
• Each party is aware of the requirements of the agreement

Complications in poorly written, or unwritten contracts, are often the most difficult to enforce as limited “proof” is a matter of argument or unavailable. This often leads to disputes being settled by industry standards, and available proof of actions.

Possibly the most complex and costly practice of commercial law is intellectual property, which can lead to millions of dollars in settlements, lawyer fees, and court costs. Many cases are drawn out for years and can have devastating effects on small and large businesses. Intellectual property law protects ideas of the mind. For companies this can mean brand and trade secrets that define the company and their product. For individuals such as artists, writers, and other creatives the law is meant to protect ownership of the work as long as the work was created for their intent and not under employment of someone else.
In addition to its complexities, intellectual property is also one of the most misunderstood by the general public. Many people confuse ideas with copyright. However, intellectual property is only observed if a company or individual puts forth effort in conceptualising that idea.

While intellectual property cases are vastly expensive, and lengthy, it is often worth the time, money and effort an individual, or business puts into arguing their case in court, as consequences are often worth much more.

A commercial lawyer can represent employment, contract, and intellectual property law. The pursuance of dispute resolution can either be resolved in court or through alternative means. Alternative dispute resolution is preferably both from a time and cost aspect, and for most cases required before being argued in judicial court. Alternative dispute resolution can be done through arbitration, mediation, or collaborative law. These are all means of coming to an agreement without having to use the court system. For most disagreements, parties can find a resolution, agreement, or compromise that will save both parties time and money. However, if an agreement cannot be reached, the parties can opt for their case to be resolved in a court of law.
A commercial lawyer will be able to assess your claim, as well as the best path to manage your case. Commercial law is complex, with several nuances in business practice that may require extensive historical research and interpretation of the law before an agreement or judicial decision can be made.

Contact the best Melbourne Commercial Lawyers, LGM Advisors, today on (03) 9832 0608 or by email at marketing@lgmadvisors.com.au. We are a trusted Melbourne commercial law firm offering differing fee structures and highly reviewed on google reviews.